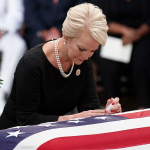 How Lucky Senator McCain Was

I listened to Meghan McCain’s eulogy for her father on my drive over to visit dad today and cried the entire way. What an incredible eulogy! It got me thinking how lucky John McCain was both in how he chose to live his life after enduring such tragedy in the Vietnam War, but also how he chose to and was able to live his last days. He could have come home from his POW experience and had it eat him up inside with anger and revenge, but instead, he channeled it towards helping to make the world a better place for all of us. Now, I don’t agree with everything McCain stood for but I definitely came to appreciate his forthrightness and his ability to acknowledge when he was wrong. I, like the Senator, stand up when I see something wrong and do not worry about what others think. I am, like McCain, a direct communicator. I am proud of that as much as I am frustrated by it when others do not communicate with me as directly as I would like them to.

To be able to communicate is so integral to our identity and self-worth. What happens when you can no longer communicate, as my dad has? Since his fall in May of 2015, his ability to express himself has deteriorated to the point where now he not only cannot express himself at all, but I do not believe he understands what I say either. How must that feel to him? He is alive, his body is still working, but he is trapped inside his own skin, unable to ask for help, unable thank anyone, unable to say he loves me or anyone. I believe he still knows who I am as when I arrive, as sometimes I still see that twinkle in his eye and when I leave, sometimes I get a kiss goodbye, But in between, I get nothing. I think about the McCain family and how they got to say goodbye to John, and how John got to say goodbye to them. It was a full circle moment and as sad as I am sure it was, I have to think the family was at peace. Being able to communicate is so central. To have that stolen from you is no different than solitary confinement, only you are relegated to confinement inside your own body. Senator McCain – how lucky you were. R.I.P